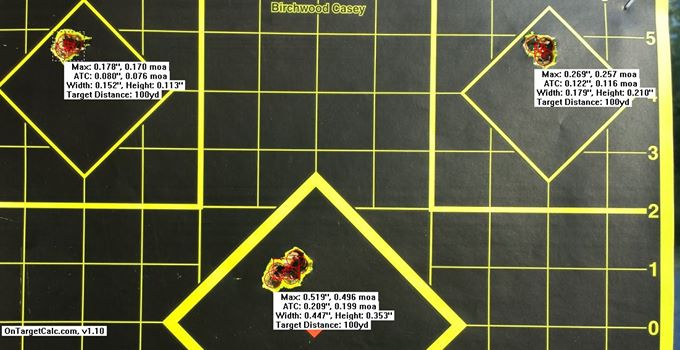 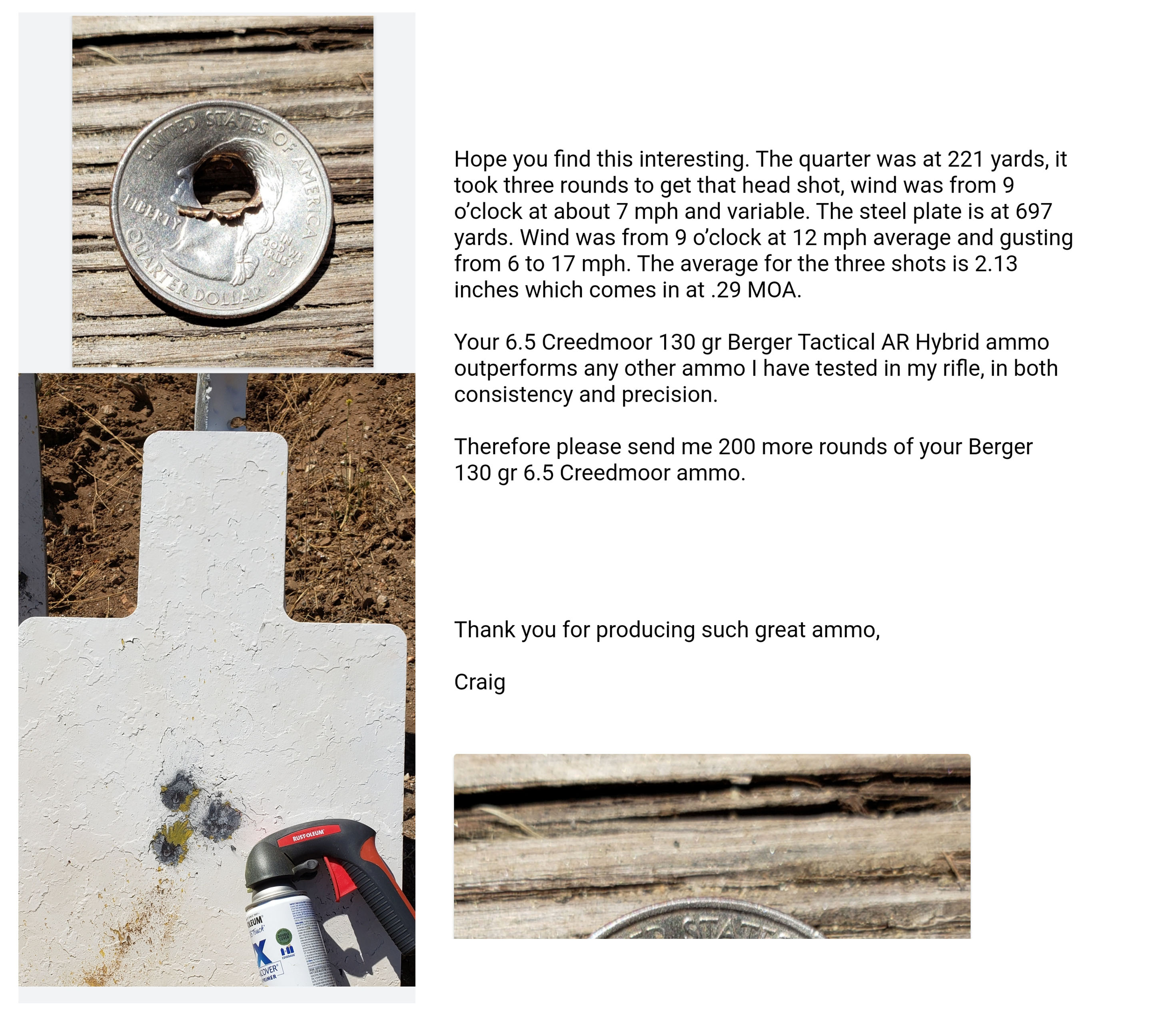 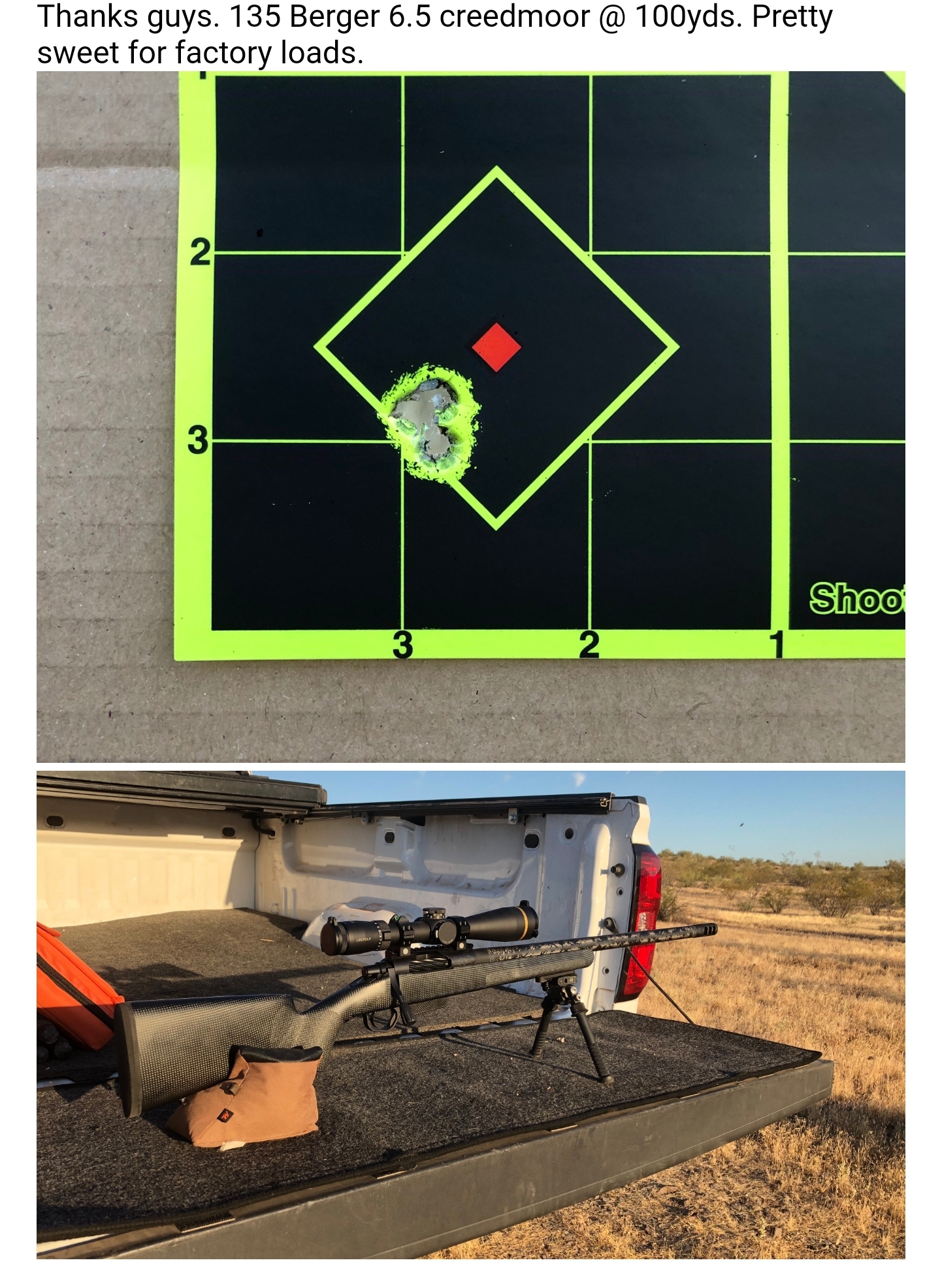 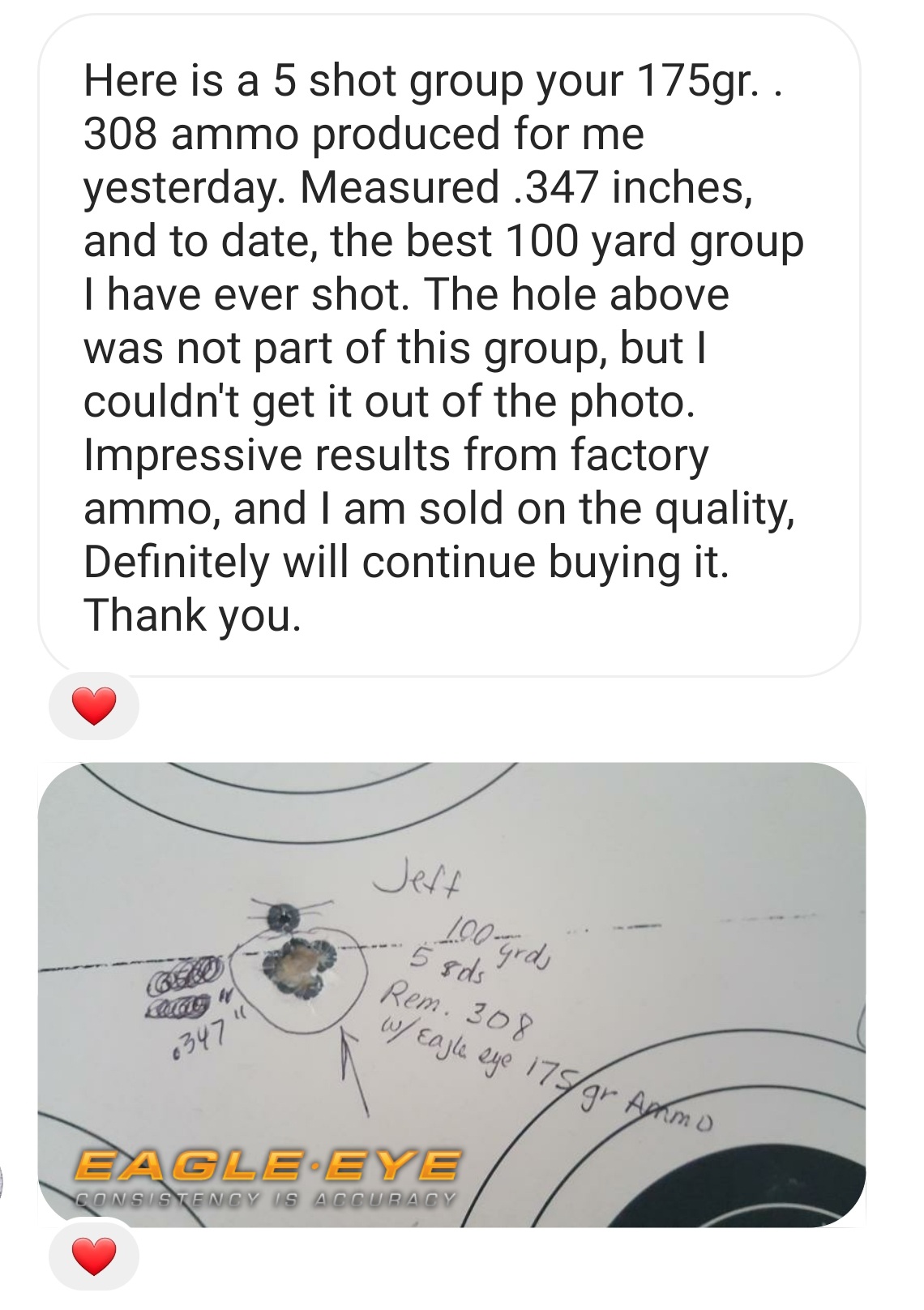 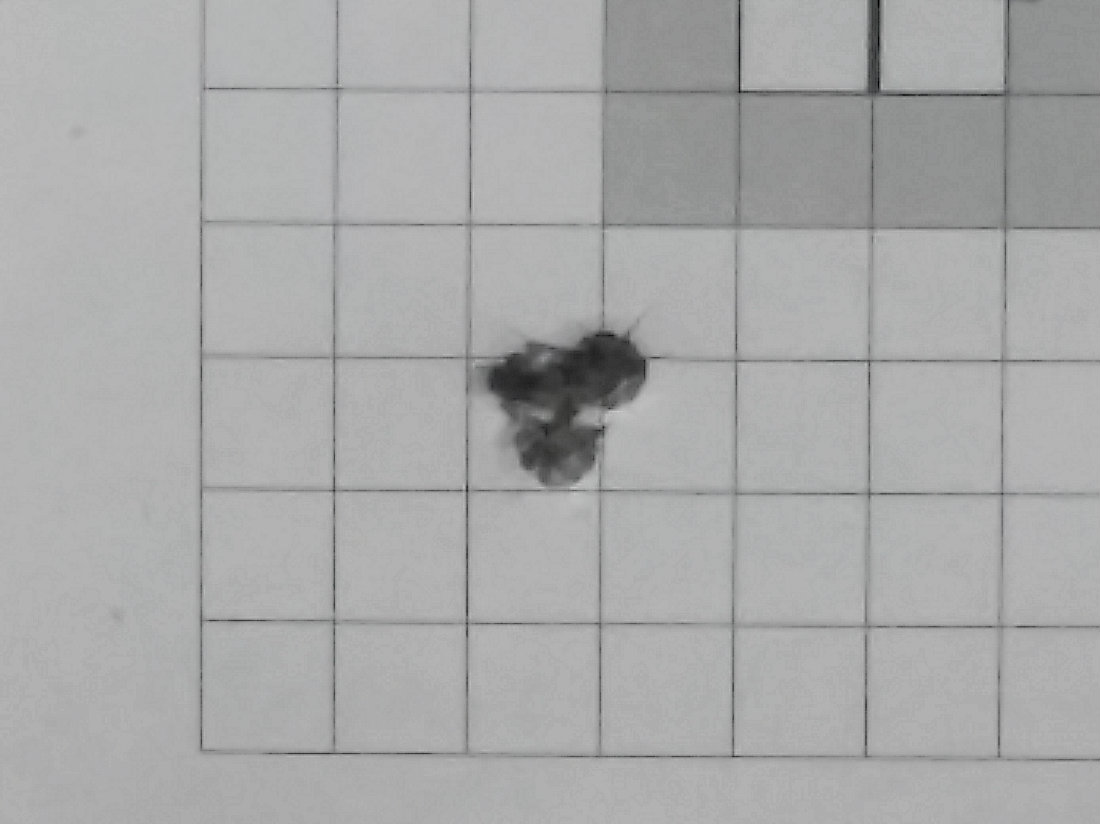 "I tested this ammo in some of the most extreme hot weather temperatures in sunny Arizona in the middle July. When testing this ammo I was mainly running a Sako TRG 22 that has 20 inch barrel with a 1 in 11 twist. The temperature reached as high as 115 degrees that day. With extremes such as these, the ammo was still holding to its true half MOA (Minute of Angle) specifications and better. The best part was that after a string of 5, I was getting a SD (Standard Deviation) of 4 fps (feet per second) and an extreme deviation of 13 FPS, which is unheard of for factory ammo in ideal conditions" 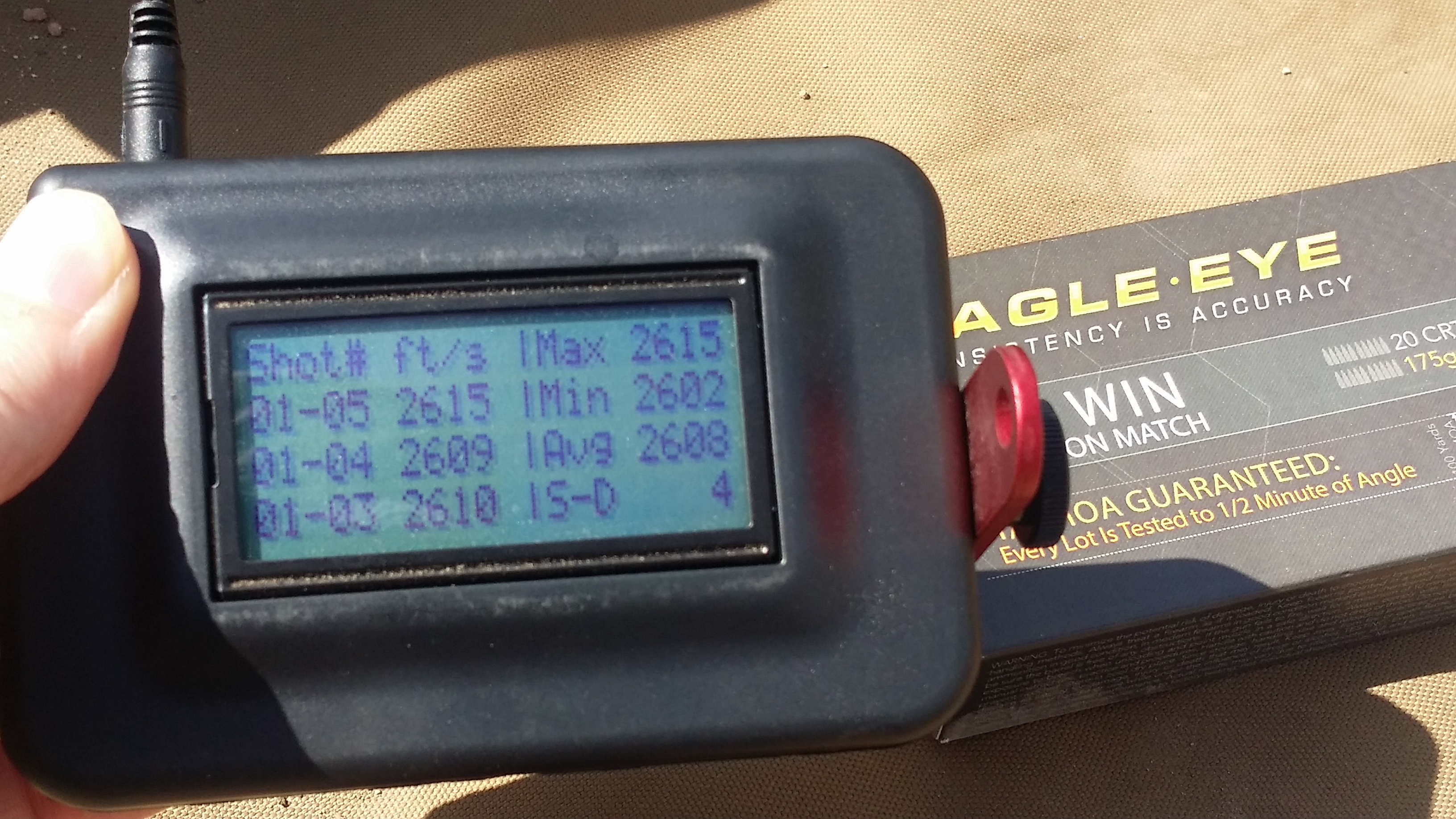 Read the full article at: http://www.motusworld.com/2015/08/review-eagle-eye-precision 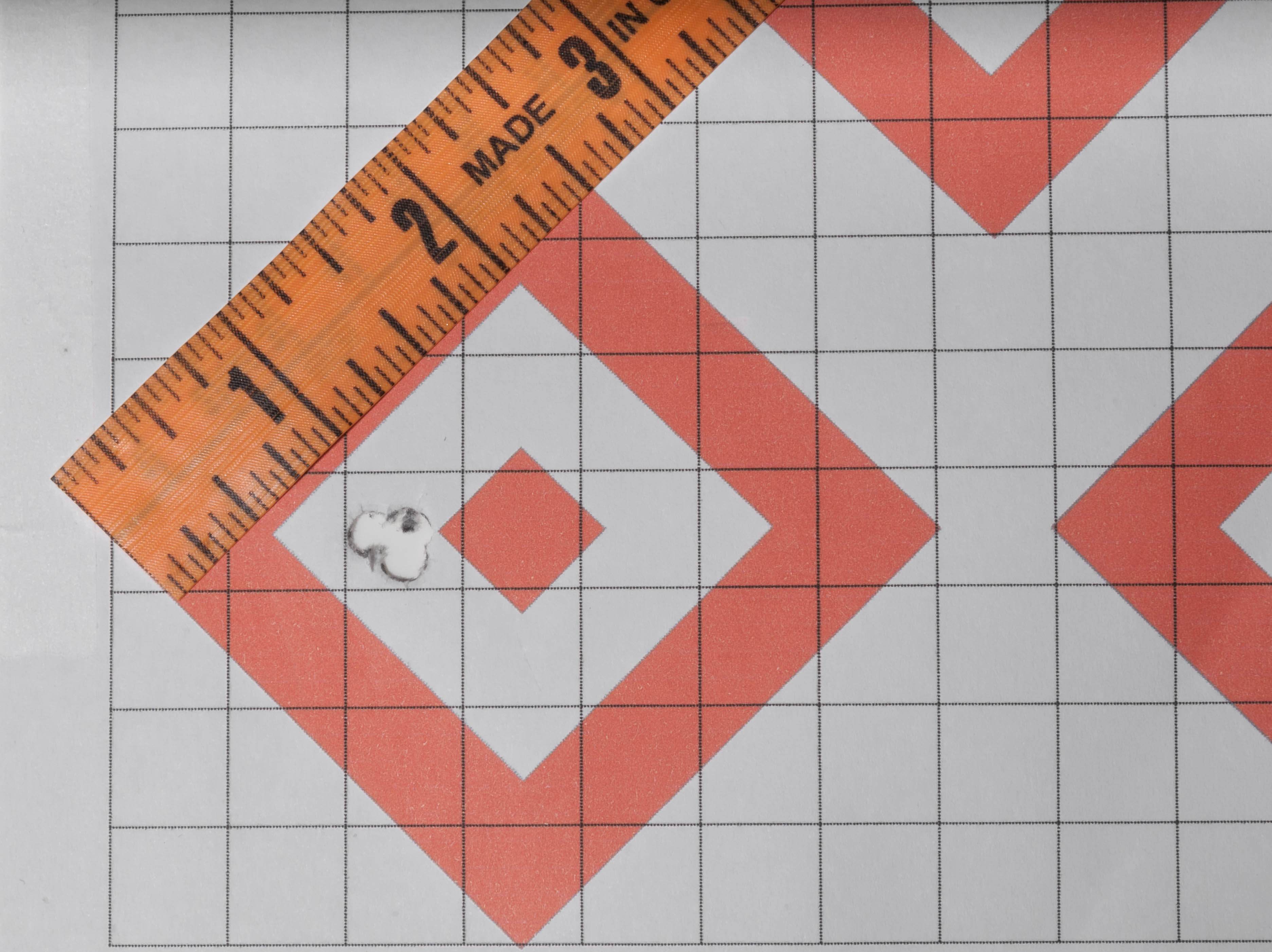 "The next group I shot at 100 yards was 5 rounds and I feel is a true representation of what the rifle/ammunition combination is capable of, the group measured 0.184”/.176 MOA! Both Dane and I were pretty blown away when we walked up to the target to see just how good it was. "

"After our experience with Eagle Eye Precision Ammunition we have to admit we are impressed. The SD on the 14 rounds Tyler fired over the Magneto Speed V3 chronograph came in at 9.1 fps. That beats the 5 rounds of hand loaded 6.5mm Creedmoor I fired earlier today which registered an SD of 11.2 fps."

"When you consider that this ammunition is factory loaded and made to perform in a wide variety of rifles chambered in .223 and .308 do you realize how impressive the results really are."

Read the full article at: http://www.sincityprecision.com/?p=4035 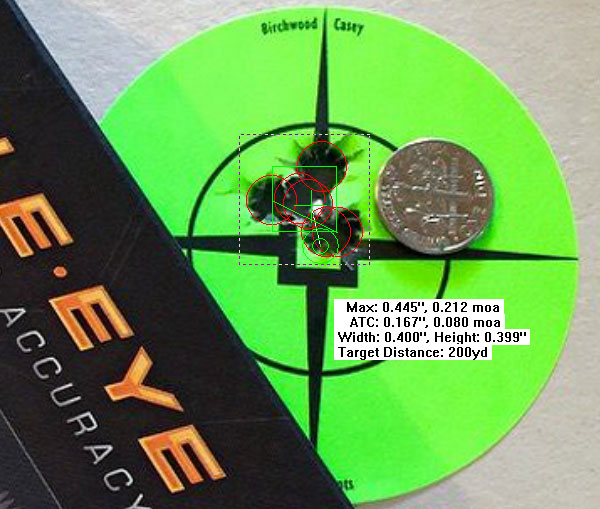 "Our friend Anette Wachter, a member of the 2015 U.S. Palma Team, recently tested some .308 Win ammo from Eagle Eye Precision. We have heard good things about this ammunition, and Anette (aka 30 Cal Gal) confirms that it shoots great. Here is her impressive 200-yard test target. Anette posted: “Most amazing out of box ammo I have shot. First six rounds at 200 yards test "

Read the full article at: http://bulletin.accurateshooter.com/2015/02/eagle-eye-ammo-impressive-308-win-factory-loads/

"Is Eagle Eye Ammunition the most consistent loading of .308 Winchester that we have ever seen? Yep. Is it more consistent than Federal Gold Medal Match? Myth confirmed."

"Center to center these are roughly 1/3 MoA groups, which is better than the 1/2 MoA guaranteed on the box, despite being from different lots. With Eagle Eye you’re not just paying for a box of consistent ammunition, you’re paying for ammunition that will be consistent with itself no matter which two boxes you pick up off the shelves and how long you wait in between shopping trips. You’re always getting the same load with the same consistency and velocity." 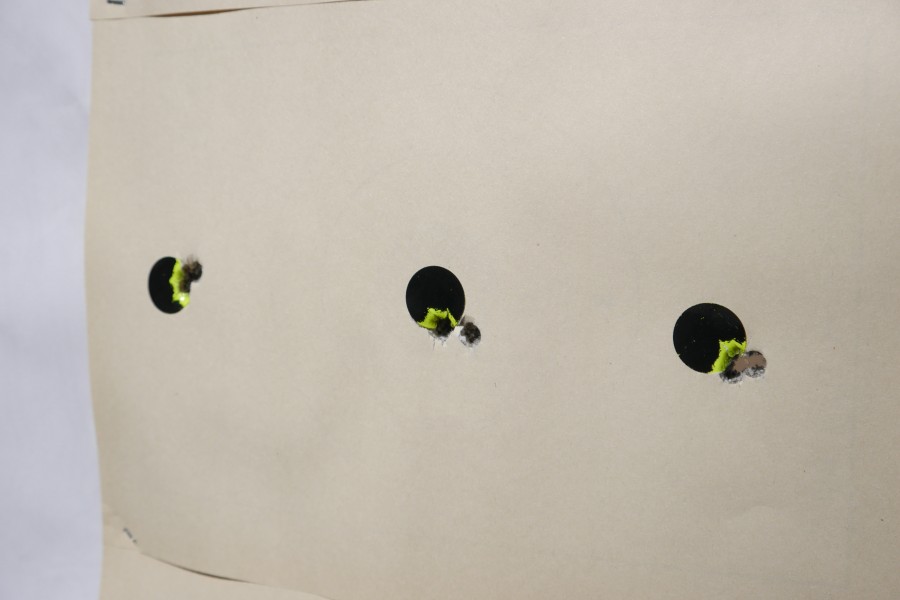 Read the full article at: http://www.thetruthaboutguns.com/2014/11/foghorn/ammunition-review-eagle-eye-ammunition/

"I've personally tested this ammunition and in my initial tests it was as consistent as anything I can hand load myself. Eagle Eye Precision Ammunition is on the up and up, you'll have to check it out."

"The last two days were amazingly fun. The first day I was testing and preparing for a demo of the brand new Eagle Eye Precision Ammunition. The next I was demonstrating that this factory ammunition could shoot better than 1/2 MOA. It was lots of fun and I felt very blessed to be part of it all."

"I had the opportunity recently to attend a demonstration of a new ammunition brand coming on the market, which is dedicated to maximum accuracy and consistency. It’s called Eagle Eye, and I came away pretty impressed…Eagle Eye guarantees 1/2 MOA accuracy with both they .308 and .223 ammunition, and it’s not just marketing BS"

"With Eagle Eye, you don’t need to stock up on a single lot number to get consistency – every box is the same down to a level that only the absolute top handful of shooters will be able to determine"

"If you are a top-tier competitor like Kelly or Glenn, Eagle Eye lets you shoot your best without having to spend the time handloading. If you’re still building those skills, it means that you can learn that much faster, because you don’t have to wonder if a pulled shot was you or the ammo (it was you). You can learn to accurately call your shots that much more quickly."

"It means you can get handload quality from a factory produced product." 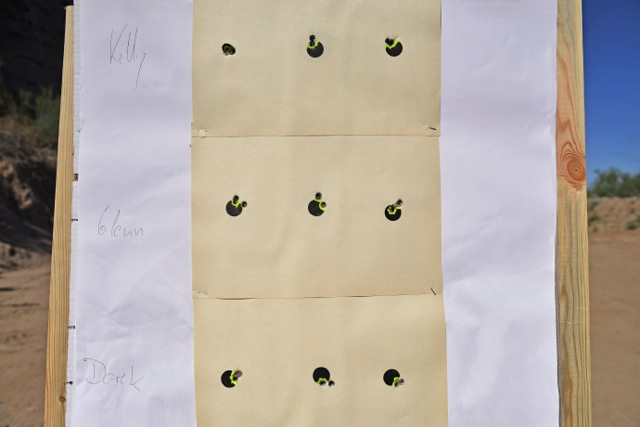 "Eagle Eye is a new ammunition manufacturer that not only claims to be the best on the market, but backs it up"

"There’s some real potential here. No need to re-zero for every new lot, no wondering if the ammo you’re using is going to suddenly start shooting remarkably different from one box to the next, and a much tighter group than with any other brand on the market. We’ve got some of their ammo on hand for further testing and a full review, but from what I’ve seen I am very damn impressed."

Read the full article at: http://www.thetruthaboutguns.com/2014/10/foghorn/first-look-eagle-eye-ammunition/

The ½ minute of angle factory test guarantee sets a new benchmark for precision match ammunition; however, simply producing accurate ammunition was not enough for Eagle Eye Precision. A special blend of brass with zero traces of impurities such as tin and bismuth combined with proprietary heat treating and forming processes produce some of the most consistent and long lasting cases available,offering shooters 10+ reloads.

Read the full article at: http://www.ammoland.com/2014/10/eagle-eye-precision-ammunition-the-new-benchmark-in-precision-match-ammunition/#axzz3JUPS9nrz 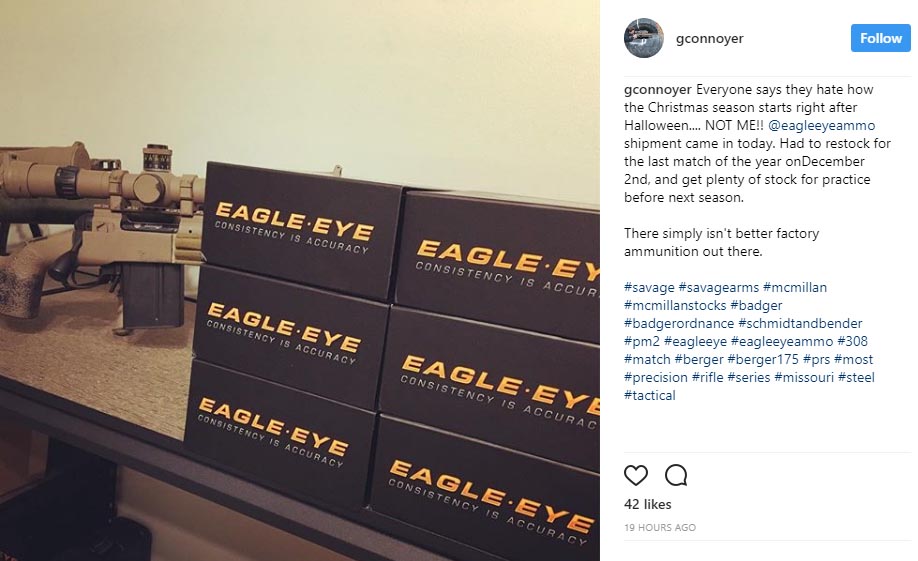 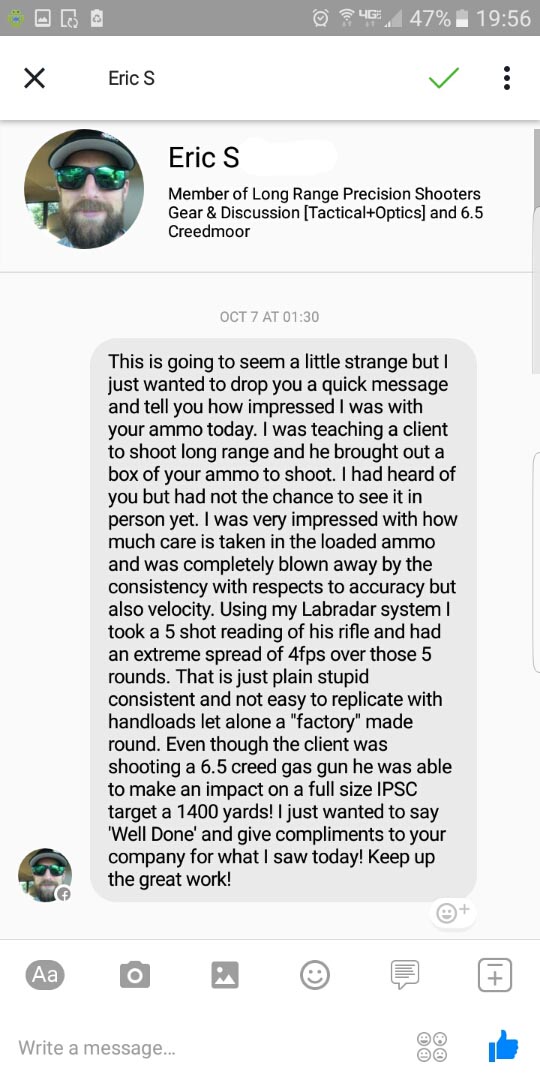 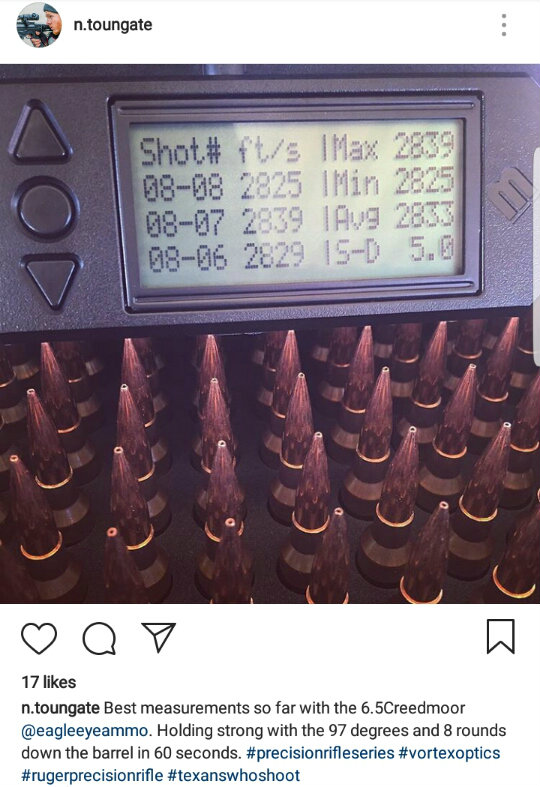 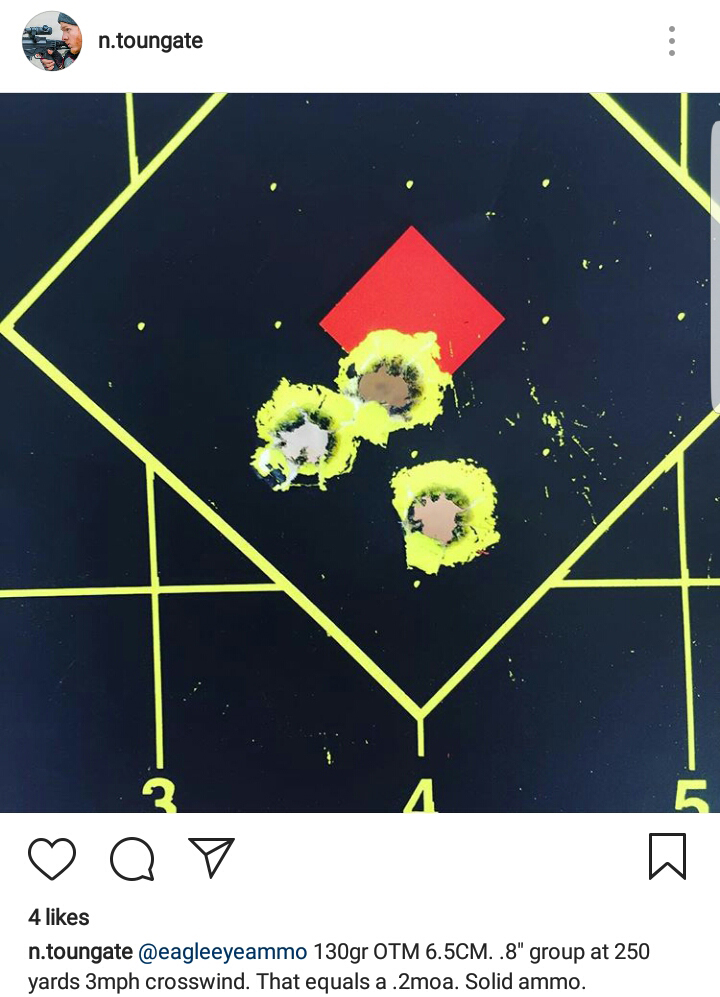 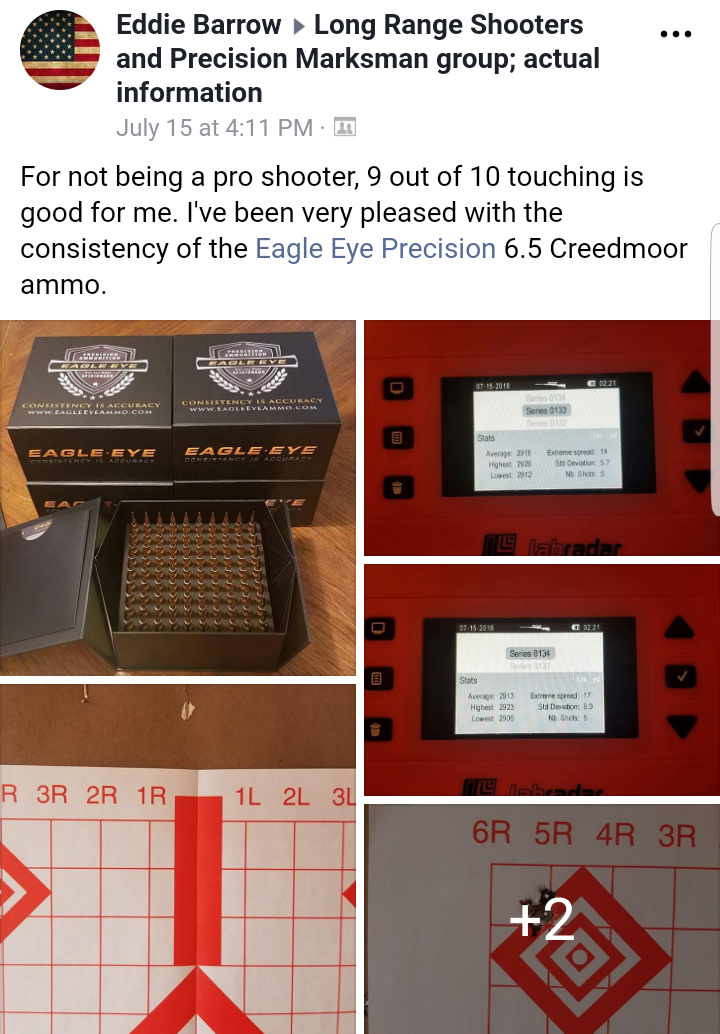 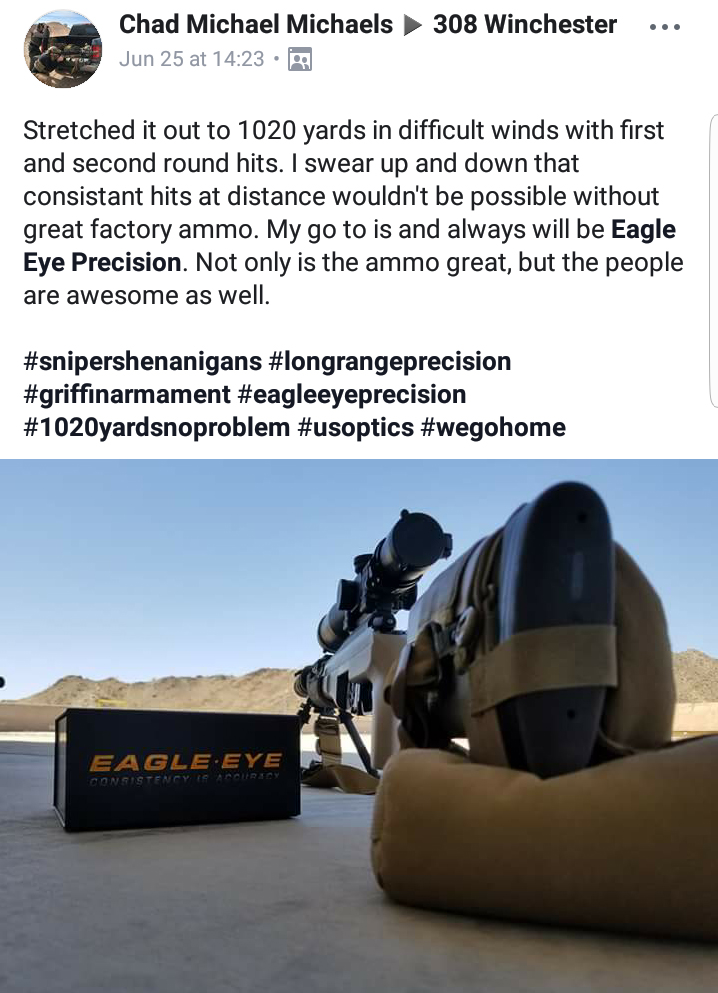 Ryan Hansen First Test - ".5moa out my brand new bone stock 700 at 500 with random rounds from 4lots. Can't wait to get some more of this to try with my other setup at some longer distances! Thanks To the Eagle Eyes guys and Longshots for give me a chance to shoot their stuff! Great product!"

And after some additional independent testing: 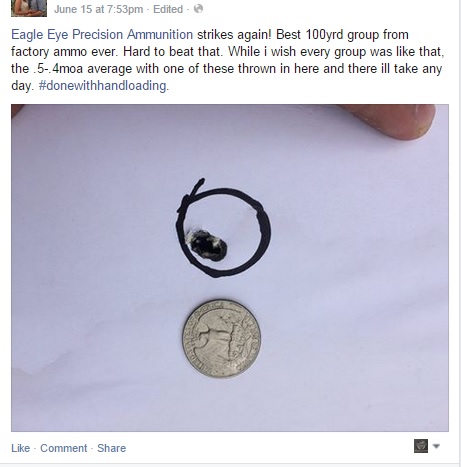 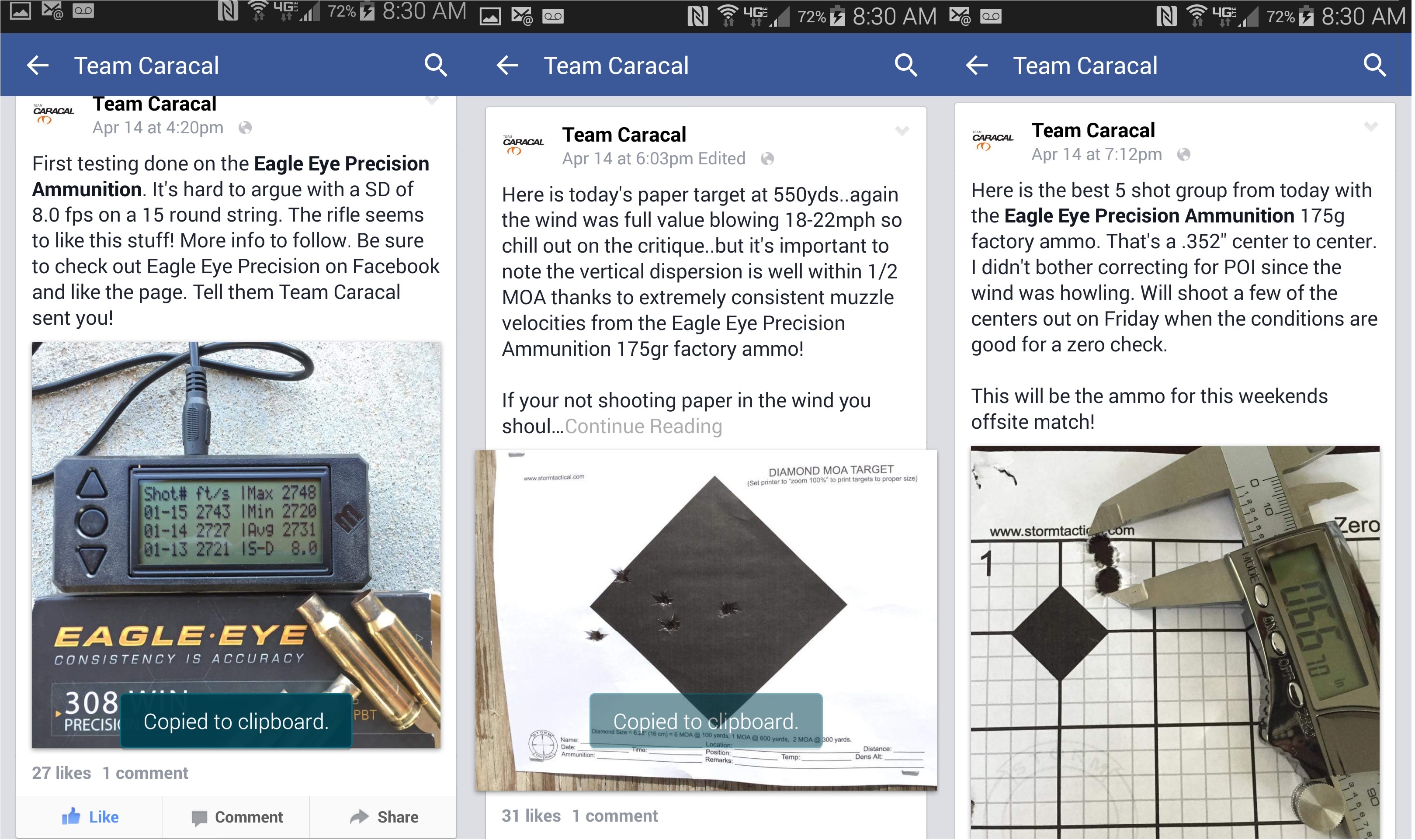 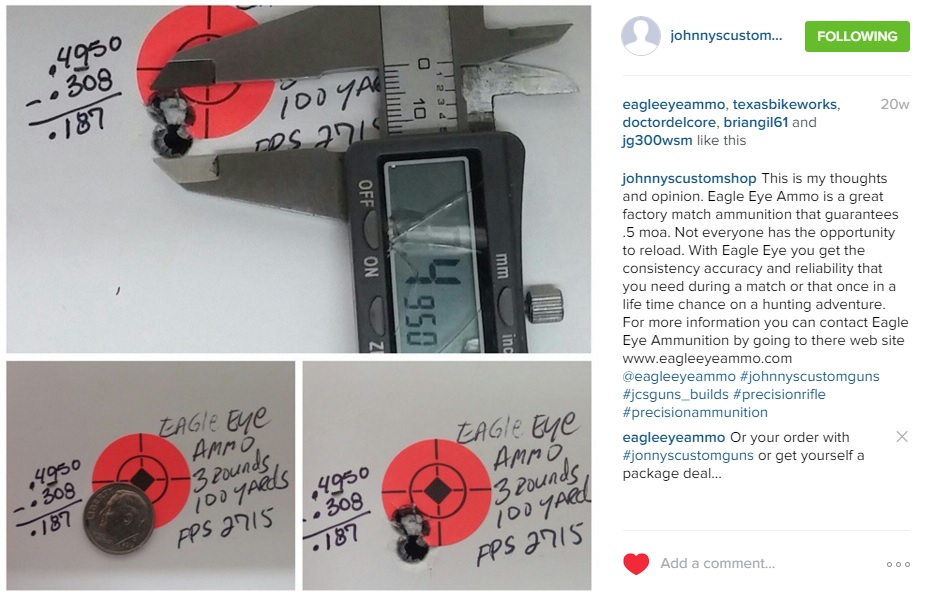