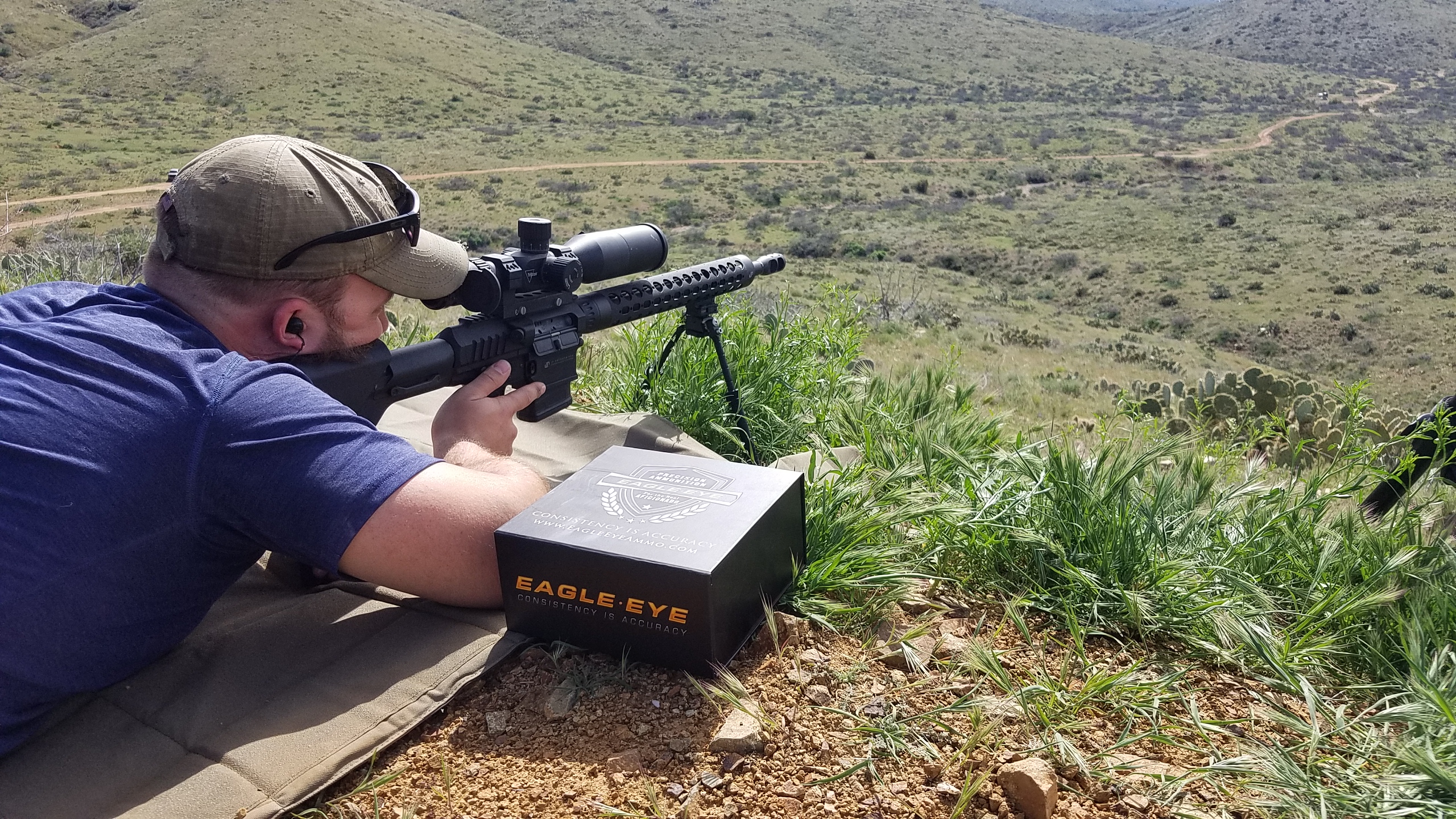 There is a lot more to Eagle Eye Precision MatchTM Ammunition than just shooting small groups on paper at 100 yards. Eagle Eye Ammo is engineered and manufactured to meet the demands of discerning long range shooting marksmen. We load each cartridge to its full potential and focus on engineering a synergistic package between case geometry, propellant blends and optimal bullet design to maximize long range ballistic performance. Focusing on the overall ballistic package for long range precision results in lower velocity standard deviations, flatter trajectory and reduced wind drift. This results in more rounds on target at longer ranges and more X’s in competition.

Obtaining the flattest trajectory and minimizing wind drift is achieved by looking at the entire ballistic package. There is a trade-off and interaction between bullet mass, bullet ballistic coefficient, case capacity and velocity. On one hand, a lighter weight bullet requires less energy to accelerate so it can be pushed faster. The result is that the amount of time gravity and wind are imparting a force on the bullet is less; thus reducing drop and wind drift. On the other hand, in the same way it takes more energy to accelerate a heavier bullet, it also takes more force for the wind to push a heavier or higher BC bullet. While slower heavier bullets may be disturbed by wind for a longer period of time, the amount of forced needed to change its trajectory by x-amount is more. If flight times and wind vectors were equal, a heavier higher BC bullet would drift less. However, at some point if the flight time can be reduced enough via an increase in velocity, the wind drift will be equal or less for a lighter lower BC bullet. An additional consideration is that heavier higher BC bullets on average tend to be longer and therefor reduce case capacity. With reduced case capacity less propellant can be used to accelerate the bullet also reducing peak velocities. Furthermore,

From the perspective of a higher BC bullet the question is whether the increase in BC is high enough to compensate for the loss in velocity. Conversely, from the perspective of a lighter faster bullet, the question is whether the bullet can be accurately pushed fast enough to overcome the reduction in BC. Again, it is important to emphasize that the first priority is ensuring accuracy and low velocity standard deviations. There is no point in having a very fast cartridge if the group sizes are abysmal and the velocity standard deviations are into the double digit range. Not being able to hit a target resulting from poor accuracy or not being able to consistently replicate trajectories resulting from high velocity standard deviations make cartridges nearly useless for long range applications. Finding the optimal solution is generally not the fastest a bullet can be physically propelled or the highest BC but the optimal combination of the two.

To illustrate the tradeoff and maximization of overall ballistic performance we will look at our 6.5 Creedmoor and 6mm Creedmoor cartridge compared to other common factory and hand loadings. For reference, the 260 Remington provides nearly identical ballistic performance to the 6.5 Creedmoor. First, the hybrid geometry of our 130gr bullet makes it very insensitive to seating depth resulting in excellent performance in a wide variety of rifles with various chamber reamer specs. Our 130gr bullet has a .295 G7 BC which is slightly higher than the ~.288 of many other 130gr bullets. Compared to other common factory loads with 140gr bullets, our 130gr cartridge is typically over 200 fps faster. Compared to a stout hand load using a 140gr class of projectile our 130gr projectiles can be accurately run in excess of 100fps faster than common hand loads using 140+gr projectiles. While the 105gr hybrid projectiles of the 6mm Creedmoor have substantially higher velocities they also have lower ballistic coefficients.

The higher velocity combined with an optimized projectile give the Eagle Eye 130gr Hybrid one of the flattest 6.5 Creedmoor trajectories…and by a significant margin. The Eagle Eye 130gr Hybrid is 1.1 mil or 38.6in flatter than standard factory offerings and a half mil (or more) flatter than benchmark hand loads running within safe SAAMI/CIP pressure limits. Despite the differences in velocity and the Eagle Eye 130 Hybrid having a slightly lower BC than the 140gr options there is very minimal difference in wind drift among any of the compared 6.5 Creedmoor loadings. When looking at the 6mm Creedmoor, the significant velocity advantage provides a much flatter trajectory. However, despite having a very significant velocity advantage, the lighter lower BC bullets are still not able to overcome the higher BC of the 6.5mm projectiles and tend to drift more in the wind.

Again, there is a trade-off between velocity and ballistic coefficient. There is no one size fits all solution to loading and optimizing ammunition. Deciding which parameters (ie. minimizing drop, minimizing drift, maximizing kinetic energy etc) depend on the shooters goals and discipline. For example, a shooter engaging targets at unknown distances or at various different distances in quick succession may prioritize a flatter trajectory in order to minimize range estimation error and allow for quicker follow up shots when transitioning from one target to another at different distances. However, for shooters who are always shooting at given known distances, the drop and flatness of the trajectory may be less important than wind drift.

At Eagle Eye, we load our ammunition to provide the best all around long range ballistic package that provides the flattest trajectory possible while maintaining minimal wind drift. By optimizing the ballistic package of our ammunition for long range shooting rather than just focusing on 100 yard groups, Eagle Eye Precision Match Ammunition not only highly outperforms other factory cartridges of the same caliber, Eagle Eye Ammunition often competes with or outperform cartridges that are generally thought have superior ballistics. For example, the Eagle Eye 6.5 Creedmoor 130gr Hybrid has approximately a quarter mil advantage in both drop and wind drift at 1,000 yards some other standard factory 6mm Creedmoor load. Additionally, the considerably faster velocity of the new Eagle Eye 6mm Creedmoor 105gr Hybrid provides a significantly trajectory and less drift when compared to other standard 6mm Creedmoor cartridges with projectiles of similar ballistic coefficient. Eagle Eye Precision Match Ammunition is for the real long range shooting aficionado.